Predator(which is actually called Yautja), is a fictional character known for its skill of hunting, invisibility and those hi-tech gadgets. I think it’s one of the most fearsome fictional monsters. It’s totally fine if you know nothing about Predator, cause now I’m going to introduce this creature and show you some resin kits!

Predator is a human-like creature was first appeared in the movie "Predator"(1987), a strong, agile, invisible battle machine in the jungle. Therefore, the first impression of the Predators might not be too positive, but as long as you study more about the specie (even though they are fictional), you may be fascinated by their abilities, technologies, traditions and cultures. Also, they were highly intelligent creatures, but sadly they failed somehow when they met human in most movies.

And here is a short introduction of the movies. (Spoilers alert!)Unfortunately we don’t know any further plans, but having five movies isn’t that bad, isn’t it? "Predator"(1987)
The very first Predator film, many people take this one as one of the classics. Basically the main idea was about a Predator was attracted to the jungle, killed USA Special Forces one by one, at last having a battle with Major Dutch Schaeffer (Arnold Schwarzenegger). And yes, the Predator lost the fight. “Predator 2” (1990)
The conflict was in LA, which was a complete different environment from the first movie (also the Predator looked different), but with similar scheme. One thing to mention is that you can see other Predators at the end of the film! “AVP: Alien vs. Predator” (2004)
AVP brought the story to a distinctive place, not like the first two. The story begins when human accidentally activated the alien-egg production line in a pyramid and they were trapped at the same time. Three young Predators (Chopped, Celtic and Scar) entered the place, killing all human and Aliens that were in their way. Finally, the last Predator(Scar) perish together with Queen Alien. His mother ship arrives to receive his corpse, but little did they know that Scar’s corpse was infested by the chestburster(Alien baby). “AVPR: Aliens vs. Predator: Requiem” (2007)
The events of AVPR took place right after the previous film. The Predalien (chestburster from AVP) was born, grew up to adult size then killed the Predators on the ship, result in the ship to crash on earth. A strong, keen veteran known as “Wolf Predator” received the signal, arrived to earth to clean up the mess.
(btw, Wolf is one of the strongest Predator in my opinion) "Predators” (2010)
This film tried to diverse from the previous series but also paid tribute to the first film “Predators”(1987). The whole plot was quite complicated, more human were involved in the story so it’s hard to describe in few words. But most important of all, it was the first time in the film that two Predators fighting!

Besides movie, there are also comics, novels and games for you to find out more about the Predators, but now let’s check out some pretty awesome kits!
Most of these were sculpted by NARIN(which I believe is one of the best Predator sculptors), and some of them were published as pre-paint statues by various companies.

First, let’s take a look at this bust from the first movie, which you can find the video review from the previous post…
1:3 Scale Predator Bust by Hell Resin

Next is the crazy Predator from Predator 2.
Urban Hunter 1:4 Scale by PredatorStuff

This is a scene of fighting, did you see that the name of the kit was “PVA” instead of AVP?
”AGAINST” Predator vs. Alien 1/6 Resin Kit by NARIN

Here’s Wolf Predator, the main character in AVPR.
“The Wolf”, by NARIN

Finally, the last one today. This Predator wasn’t even in the movies but this kit is cool enough!
“ Bad Blood” Predator 1/6 Scale Resin Kit by NARIN (might be based on a comic book” Predator: Bad Blood” published by Dark horse Comic.) 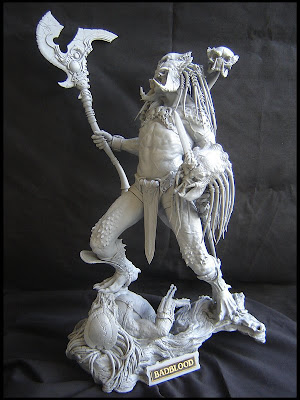 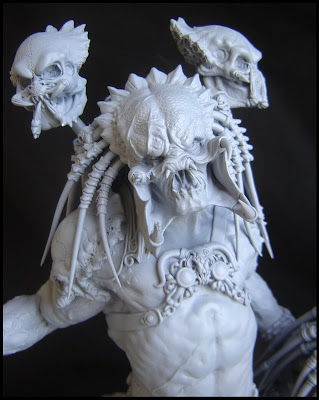 Since Predator is one of the popular sci-fi franchises around the globe, there are many companies that produce kits, models, toys, even costumes, lots of amazing stuff which a short article can’t contain.

Hopefully there will be more film/comic/games to come, people can discover more work of art then, and devoted fans can get excited!