Now we're going to introduce some of my favorite Gundam resin kits from VP, NG, and G-System corporation, which these three are maybe the biggest and most famous Gundam resin kit producer now in the world.(Unfortunately, VP was dismissed couple years ago, and they turned to Wolke+r and MS-build now.)

1.RX-93 V(Nu) Gundam:
Nu gundam is the main force of LondBell, and it's designed for the U.C.0093 final battle between NTs.(New type, which means a evolved humankind.) In the anime "Mobile Suit Gundam Char's Counter Attack", Amuro-Rei took Nu gundam as his Mobile suit and fight against Char-Aznable who rode on Sazabi. In the end, they both disappeared in the explosion caused by the war. Until U.C.0096, another legend has began in an OVA anime which is well known as "Mobile Suit Gundam Unicorn".

Actually, to be a fan of Gundam, Nu Gundam is one of my favorites since the story and mechanical design are terrific! Let's see why it's so different than others.

First let me show you some versions of the resin kits of Nu Gundam: 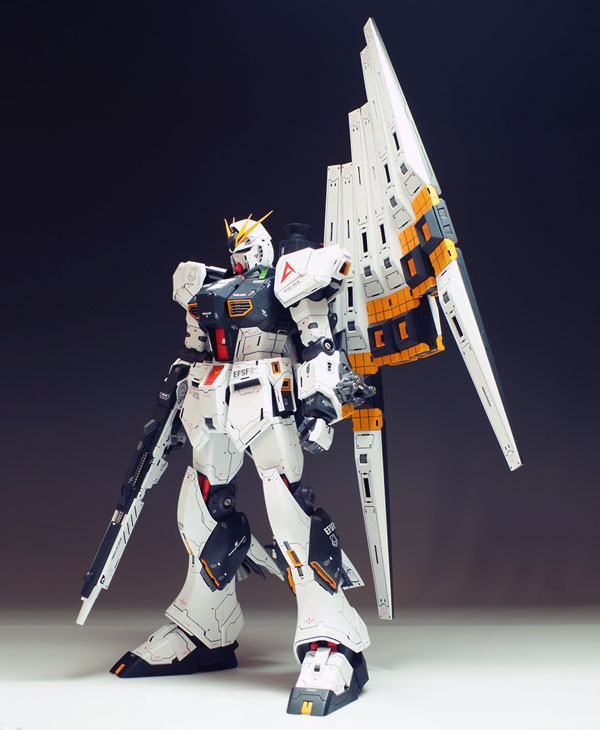 1/60 RX-93 Nu Gundam From Neograde
You can see more details from this rotate video:

What's more, Nu Gundam has a revolution version which named HWS(Heavy Weapon System), compared with original Nu Gundam, HWS version Nu Gundam looks much "Heavier" and "Stronger", therefore some of Nu's fans don't like the additional setting about HWS........ But not for me! I do like the new HWS one! Actually I like all kinds of heavy armors or weapon systems adding to Gundam, they're just so cool and fantastic!

Obviously you can see lots of details were added to the model itself, for example a bigger rifle gun, a bigger shield with booster units in it and of course heavy armors wear in front and side on the legs.
And this is a more "Traditional" style of HWS Nu Gundam, let's see a more "Crazy" version resin kit:

Do you guys see the details of the booster units in the shield and the missiles on the armor?
I think no one can defeat such a monster like this...............

Is the legend of Nu Gundam ending here?

Nope~ Because he's just so welcome that BANDAI(Owner of Gundam copyrights) had released a novel illustration version Nu Gundam, which was giving a new setting and new name - Hi-Nu Gundam.
(There's a huge controversy over if Hi-Nu is an advanced type of Nu Gundam or it's just the same mobile suit only appeared in different worlds - the novel world. But that's not important anyway, Hi-Nu Gundam makes another climax of the Gundam series!)

And Here's the resin kit review and a painted work video:

RX-93-v2 Hi-v Gundam Extra-Fit-Evolve5 From Wolke+r
(In this version, The Fin Funnel weapons are quite different from others in shape.)

In the end of the Nu Gundam legend, please allow me to introduce the best of the best:
Hi-Nu Gundam HWS - A mysterious moblie suit never recognized by BANDAI officials. 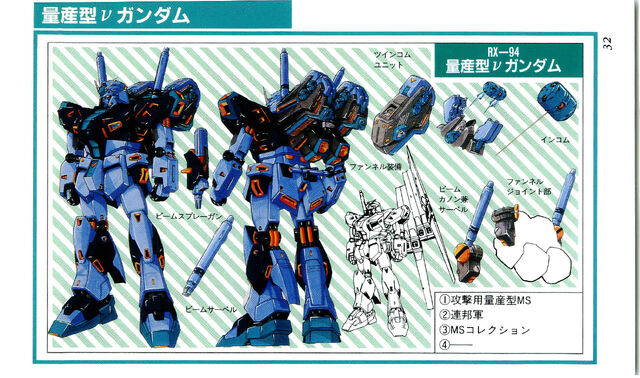 But it's another long long story...........
If you're interesting in it, just surf on the internet and you'll get what you want~
Finally we step to my second favorite Gundam!

2.MSA-0011(Ext) EX-S Gundam
EX-S Gundam is from the novel "GUNDAM SENTINEL" and is an advanced type of the original S Gundam. As what i said before, All kinds of heavy weapon systems are my styles! Including this EX-S Gundam. 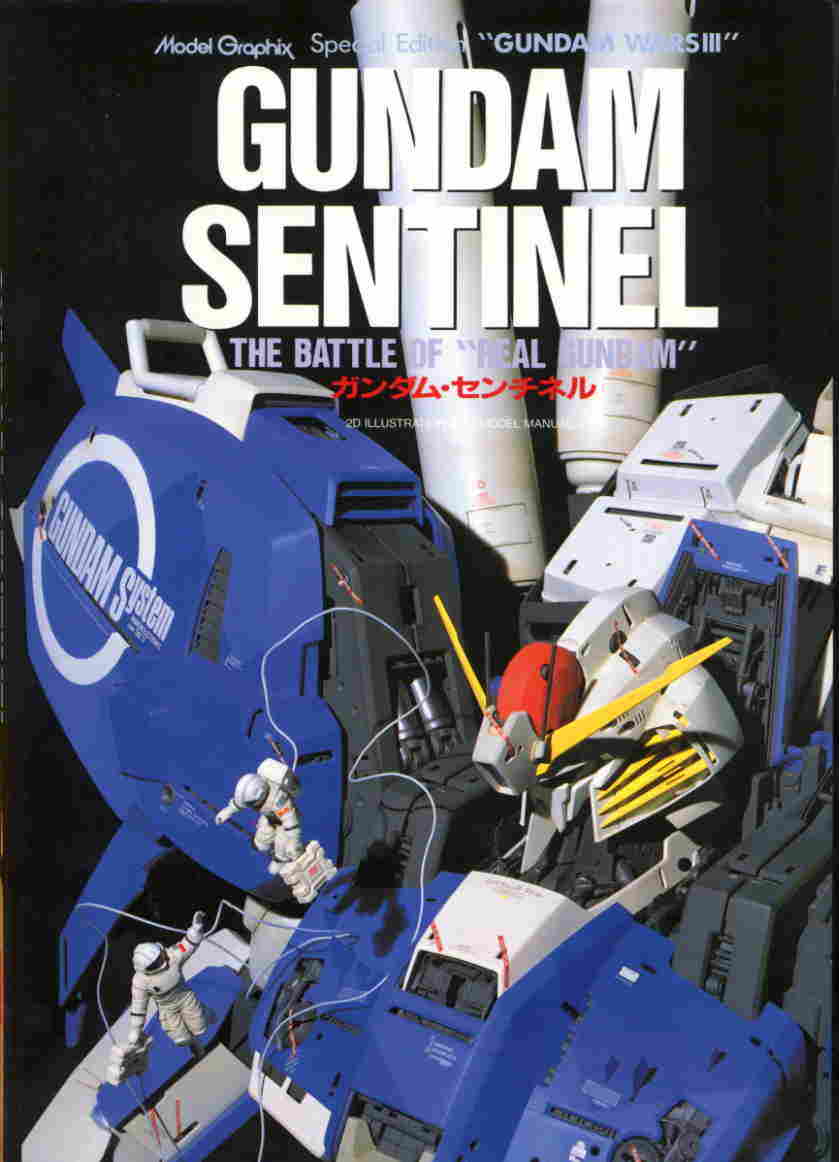 I'm just going to introduce MSA-0011(Ext) EX-S Gundam, since most of the resin kits and model figures are in EX-S Gundam type.

This 1/35 Resin kit is really huge!
Here're two small pictures but you can still realize how big it is from them: 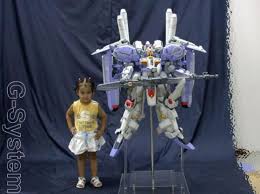 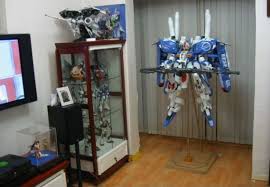 And this is the process how the fans built this incredible resin kit: 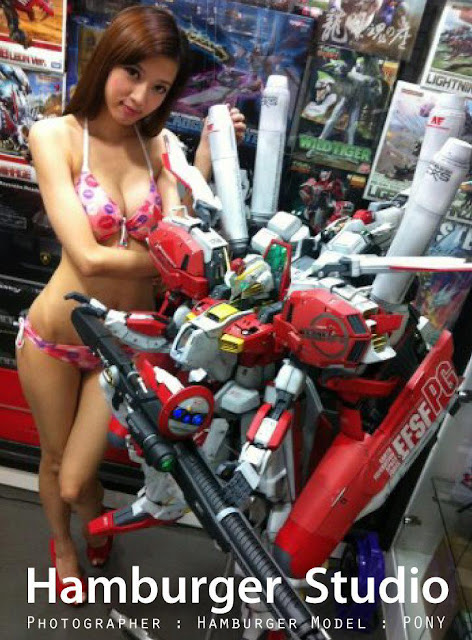 Here's a parts review of it, you can know how complicated the parts are and building process is:

Video source
Can you tell the differences between the custom one and the original one?
Anyway, all types of EX-S Gundam have their own features and fans.

Everyone who are Gundam fans know this first Gundam standing on the ground since U.C. 0079. After RX-78-2 Gundam was produced by EFSF(Earth Federation Space Force), Principality of Zeon had lost their army force again and again. In the end, RX-78-2 Gundam became a lengend for the symbol of defeating Zeon in wars. That is why the soldiers of Zeon will call it "White Devil". 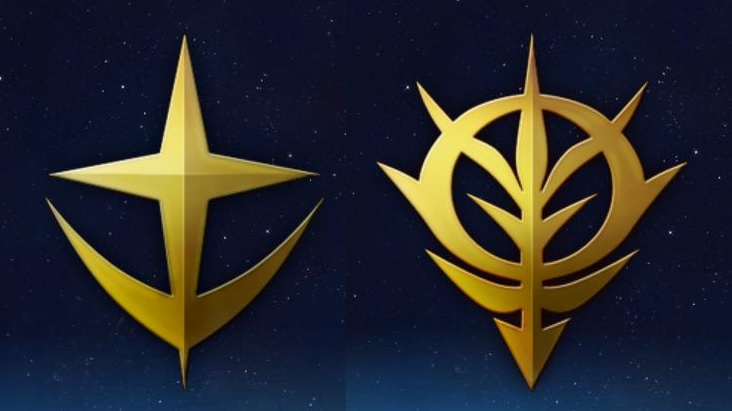 Besides, There're lots of settings about the advanced versions of RX-78-2 Gundam, and my favorite of them is FA-78-1 Full-Armor RX-78-2:

FA-78-1 Full-Armor makes RX-78-2 Gundam look more like a Real-type MS weapon but not only a toy or a statue standing there. First the color is close to the marines, and the weapon he uses are more like what we'll use in the real war.

It's a little bit science fictitious, isn't it?
Let's see how fictitious it can be:

So which one do you like?
Nu Gundam, EX-S Gundam, or the White Devil RX-78-2 Gundam?

Hope you guys enjoy the introducing of these Gundam resin kits.